Please continue to monitor the websites to ensure you comply, and member organisations of BSSC will continue to express their concerns to George Eustice Secretary of State about the threat of costly to conservation legal threats posed by groups like Wild Justice.

The proposals on the restriction of all lead in ammunition (gunshots and bullets) and fishing tackle, prepared by the European Chemical Agency were published on 15/1/2021(about 900 pages long). These proposals will go to public consultation and to the Risk Assessment and Socio-Economic Assessment Committees which are expected to have submitted a combined opinion to the Commission by January 2022. Legislation could be passed later in that year.

A ban on the use of lead shot for hunting with a five-year transition period and the option for Member States to derogate for sports shooting when releases into the environment are minimised.

A ban on the use of lead in rifle bullets with transitional periods: 18 months for any center-fire calibre equal to and above 5.6mm and 5 years for calibres less than 5.6mm centrefire (and rimfire in general).

Derogations for continued use, if releases to the environment are minimised, i.e., when sports shooting ranges are equipped with bullet traps. Military and other non-civilian uses of lead ammunition – such as by police, security and customs forces – are not included in the scope of the investigation. Indoor uses of lead ammunition are also excluded. We will update you once BSSC has digested this proposal.

On 23/3/2021 DEFRA announced the following plans to phase out lead ammunition in a bid to protect wildlife.

“We (DEFRA) are considering restrictions under the UK’s new chemical regulation system, UK REACH. We have requested an official review of the evidence to begin today and will launch a public consultation in due course.

Environment Minister Rebecca Pow said: “Addressing the impacts of lead ammunition will mark a significant step forward in helping to protect wildlife, people and the environment. This is a welcome development for our new chemicals framework, and will help ensure a sustainable relationship between shooting and conservation.”

Dr Julia Newth, Ecosystem Health & Social Dimensions Manager at the Wildfowl and Wetlands Trust (WWT), said: “Conservationists, including WWT, shooting organisations and game meat retailers have recognised the toxic risks from lead ammunition to people and the environment. Regulation of its use in all shooting, wherever this may happen, is very much needed as soon as possible to protect human and animal health to enable us to over towards a greener and safer future.”

(Some) Shooting organisations are also supportive of transitioning away from the use of lead ammunition and are working with government to bring this about.

The Environment Agency, together with the Health and Safety Executive, will now start a two-year process to review the evidence, conduct a public consultation and propose options for restrictions.

UK REACH allows decisions to be made on the regulation of chemicals based on the best available scientific evidence, ensuring chemicals remain safely used and managed. (UK REACH is a post Brexit organisation to replace the EU REACH organisation.)

BASC’s response to this which appeared in The Times on 24/3/2021 was as follows: 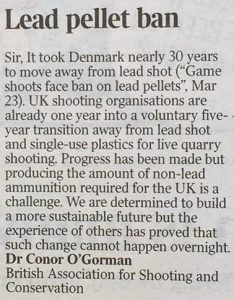 It would seem BASC, by its own admission, may have to review their five-year transition timetable to all non-lead shot. Many in the industry and shooting community did warn that five years is probably an unrealistic and overly ambitious timeframe to be able to do all the development work necessary, and to set up the manufacture and supply of materials.

You can read more from BASC here: https://basc.org.uk/two-year-uk-lead-ammunition-review-threat-or-opportunity

Personally, I hope the “Review of Evidence” will be very wide ranging. That it will include all materials used in ammunition, lead and it’s additives as well as all the proposed lead alternatives. In the state that it is used in, with the different uses and locations taken into consideration. Soil types can affect the absorption of leached chemicals, and some soils are naturally high in some of the ingredients of ammunition such as antimony.

This would appear to be a great opportunity for Government, Conservationists and the Shooting Community to work together and form a responsible policy together. If the framework for this review is open to subjecting all materials used in ammunition and their combinations, to exactly the same tests, and the tests chosen are respectful of the states and conditions in which the materials are used, we may achieve a thorough and responsible evidence based review on which to base sensible policies for the future.

NABIS expressed concerns about the use of antiques in crime which led to the Law Commission looking at the relevant legislation and recommending that there should be a statutory definition of “antique firearm” to provide legal clarity. A provision was made in the Policing and Crime Act 2017 for a definition to be set in regulations. The public consultation supported a statutory definition close to the existing Home Office guidance.

The regulations define “antique” by reference to the date it was manufactured, it’s propulsion system and a list of obsolete cartridges.

Only firearms manufactured prior to 1/9/1939 qualify as antiques. 23 additional types of cartridge have been added to the existing obsolete cartridges list. Firearms chambered for those cartridges can potentially be held as antique firearms.

7 types of cartridge which are regularly used in crime have been removed from the obsolete cartridges list, and consequently the definition of “antique firearm” no longer applies to firearms chambered for them, these firearms will have to be put on an FAC S1 or S7.1 or S7.3. As long as you apply before 21/9/2021 you will remain in lawful possession of your firearm even if your application is still being processed, or being appealed when the transition period ends.

So, if your beloved firearm is no longer an antique under 58(2) of the Firearms Act, what are your options?

If being transferred onto an FAC you may face costs for gun safes and security to comply with current guidance if you do not already have such in place. The latest 2020 guidance has now been published: https://www.gov.uk/government/publications/firearms-security-handbook

These firearms can be sold or transferred up until the end of the transition phase. After then they must be proofed first, before sale or transfer, to comply with the Proof Acts which lay down that no small arm may be sold, exchanged or exported, exposed or kept for sale or exchange or pawned unless and until it has been fully proved and duly marked. The maximum penalty is £1,000 for each offence. An RFD can take these firearms in, and arrange for their proofing.

Once these regulations come into force, if you have a firearm chambered for a cartridge which has been added to the obsolete list, you may, if you no longer wish to shoot this firearm, dispose of the ammunition and ask the police to remove said firearm from your FAC as you will hold it under Sect58(2). NABIS want these regulations to be reviewed every three years and amended if thought necessary for public safety. BSSC want a seat on the review panel.

My thanks to Jim Hallam (RFD) for clarifying a number of points on this. 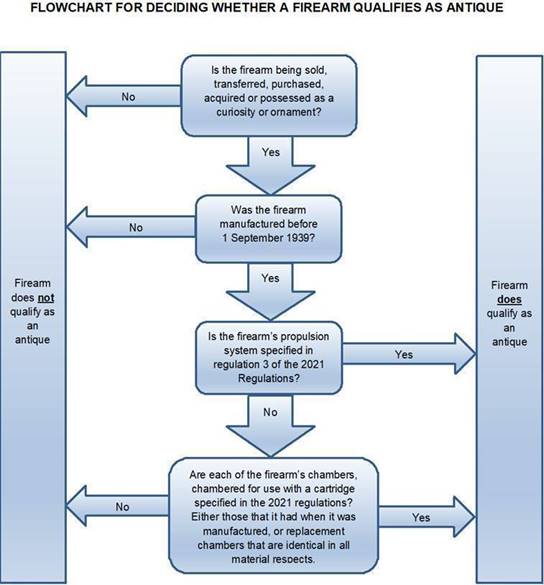 All amendments to the 2019 Firearm Security Handbook were agreed with the police and signed off in September barring the outstanding issue of CCTV on shop-fronted dealers’ premises, which was resolved in conference on October 15th .

The publication of the revised Handbook is now on the GOV.UK website: https://www.gov.uk/government/publications/firearms-security-handbook

However, our member Mark has already found a missed mistake.

Extract from Security Handbook – Level 3 2.23 If the risk is assessed as being greater than the previous level due to additional factors such as: · Higher crime rate, ·Certain high-profile certificate holders · Any other factors which substantially increase the risk of burglary, a larger number of firearms held Then the following should be considered as well as the previous level of security: a) Dividing the risk, for example by the provision of separate cabinets, perhaps in different locations within the premises, to break down the number of firearms per enclosure. b) Additional target hardening of the storage (cabinet with individual gun locks, or extending to a gun room). c) Protected by an intruder alarm to BS4737 3.30:2015 or equivalent and ideally monitored by a NSI monitoring centre with an appropriate response. (This “alarm” is referred to nine times in the handbook.) 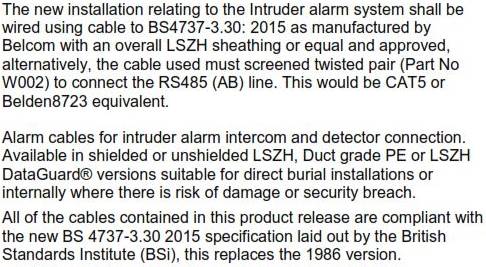 “With regards to firearms security as detailed in the 2020 security manual under levels 2 & 3 it refers to Intruder alarms to BS4737 3.30:2015. However, that BS does not refer to Alarm systems it refers to cables for alarm systems, please see the extract on the left from my Electrical Engineers specifications.

Previously I recall an acceptance of a notifiable alarm system. The issue with the statement in the security manual is that its incorrect and perhaps suggests a hard wired alarm however these are more expensive than a wireless system.” Mark.

As of 2017 the “Police and Crime Act 2017” prohibited the sale, loan or transfer of any firearms that had not been deactivated to the 2016 EU standard or any subsequent standard as published by the Secretary of State.

This does not affect OWNERSHIP of pre 2016 deactivated firearms, but does prohibit their TRANSFER, whether by sale, swap, gift or inheritances

The only exception to the transfer of a pre 8/4/2016 deactivated firearm is when it is transferred to a museum which holds a “museum firearms licence”.

Firearms deactivated to standards which pre-date 8/4/2016, or any subsequently published specification by the Secretary of State, are considered to be “defectively deactivated weapons” (DDW).

As of 12/12/2019 it becomes a criminal offence to TRANSFER or LEND, for more than 14 days, a deactivated firearm to another person without registering the transfer with the Home Office. The person making the transfer must notify to whom they are transferring the deactivated firearm, with the make, caliber and serial number by registered post, recorded delivery or email before, or on the day of transfer or as soon after as is practicable.

Persons in POSSESION of a deactivated firearm commit an offence if they have not notified the Home Office of possession unless notice of the transfer has already been given by the person who previously owned it.

The forms are available on GOV.UK and should be sent to deactivatedfirearmsnotifications@nullhomeoffice.gov.uk or by post to:

As per Firearms Regulations 2019 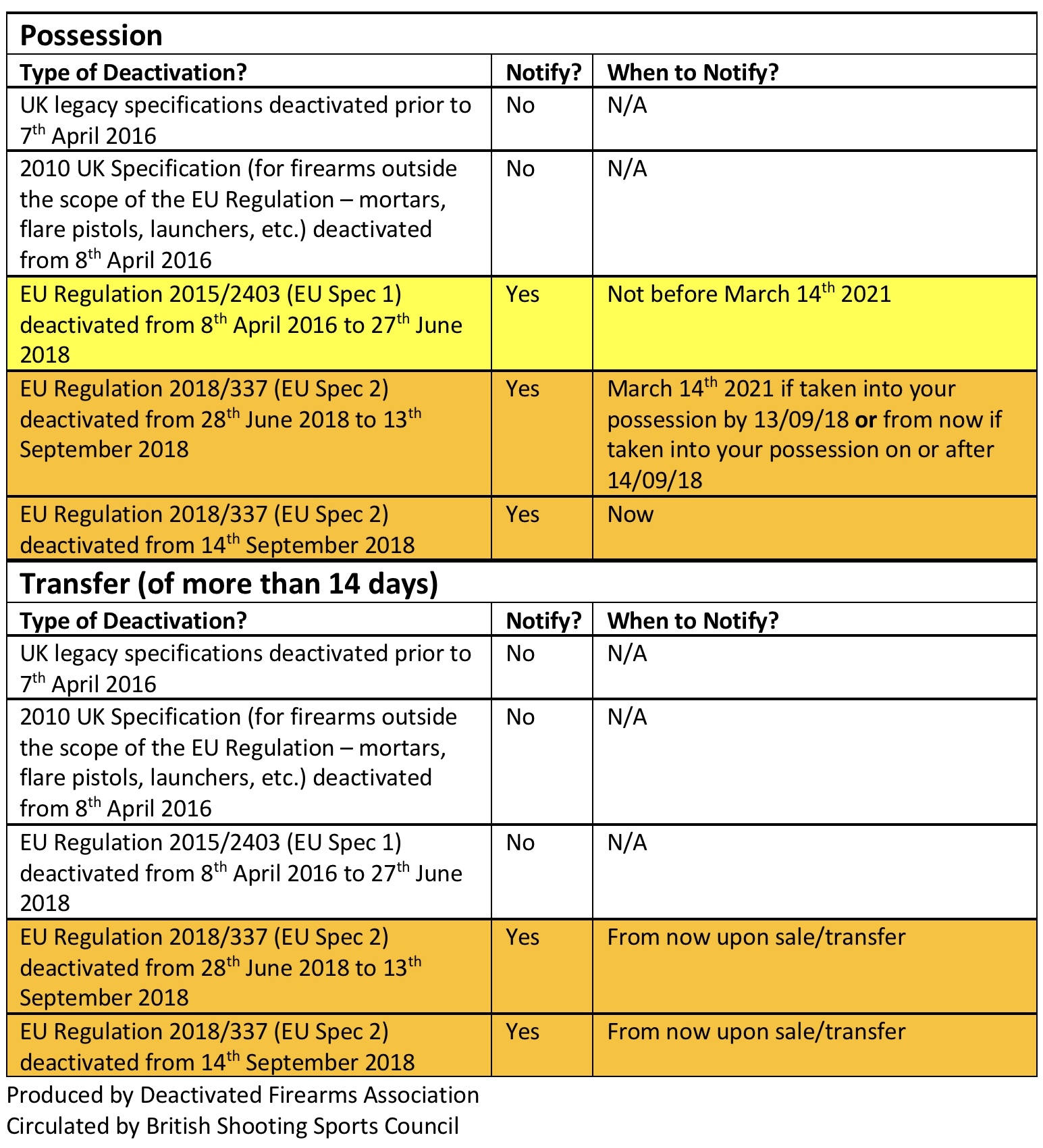 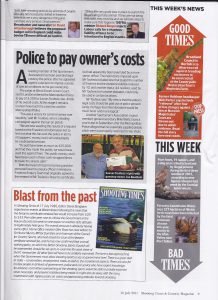 You be the Judge